ICCL wishes to thank Clive Memmott, CEO of Greater Manchester Chamber of Commerce for hosting LEGO® SERIOUS PLAY®Taster Workshop and addressing participants with great words about innovation and creativity: "We think that this tool adds up to the great work performed by Dr Abeer to support our members in developing their creativity and innovation, the GMCC is keen on introducing all what we can to develop businesses in and around Greater Manchester". Next time, we hope you will enough time to play with Lego!. 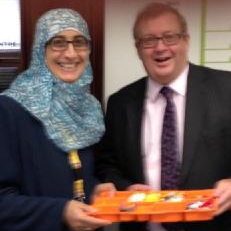 The LEGO® SERIOUS PLAY® (LSP) Taster Workshop which was conducted at Greater Manchester Chamber of Commerce on 21st September was concluded with success and very positive testimonials. The morning and afternoon sessions attempted to familiarise participants with hands-on experience of the tool and its in-depth benefits to businesses and individuals. After about an hour spent with skills development exercises aiming at establishing connection between hands and the brain, participants built with excitement their companies’ core and aspirational identities. LSP was explained in much detail, also its uses and value for strategic planning and scenarios of the future. Participants were challenged and pushed to think creatively into their USPs and answering the question: ‘why would a client choose them and not the competition’.
LSP is used for small, medium and large companies to initiate and sustain change based on 100% participation, visual imagery and creative utilisation of the right side of the brain in a non-stressful hands-on sessions providing great opportunity to unlock potential in high value teams.